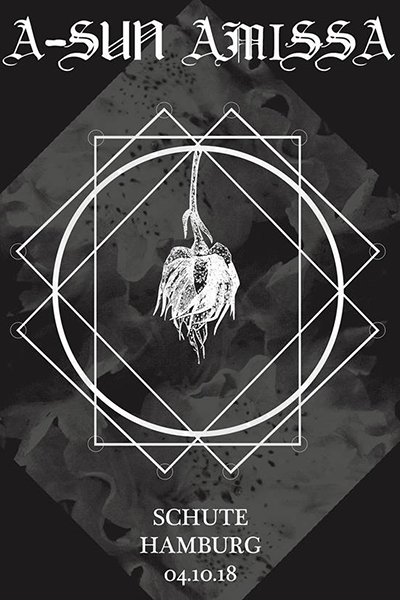 A-Sun Amissa (UK - Gizeh Records / Consouling Sounds)
A-Sun Amissa is a music collective founded and led by Richard Knox (The Rustle of the Stars, Shield Patterns, Glissando) that has featured an array of members and collaborators since it’s formation in 2011. Recorded output has been released on Richard own Gizeh label as well as Belgium's Consouling Sounds.

The group produce a dense, drone-like atmosphere, accompanying evocative, melodic string and woodwind sections, intertwining guitars, heavy beats and field recordings. The live show features sections of the recorded output combined with improvisation to unlock new movements and progressions in the music. The subtle, considered textures and the hypnotic interaction between players and instruments provide an intense live performance.

"Not so much a satanic mass as a acknowledgement of the pain and loss that is an inescapable part of life" We Need No Swords
“It’s post-rock, it’s jazz, it’s modern composition; it’s the gnarled mirror image of the band’s previous work, a bold experiment that few would attempt. We admire A-Sun Amissa for choosing the road less traveled” A Closer Listen
“In a style comparable to the grandaddy of post-rock, Godspeed You! Black Emperor, but with an ambient twist of sonic atmospheres and jazz inflections, A-Sun Amissa explores the progressive world of drones and instrumental intricacy.” Echoes & Dust